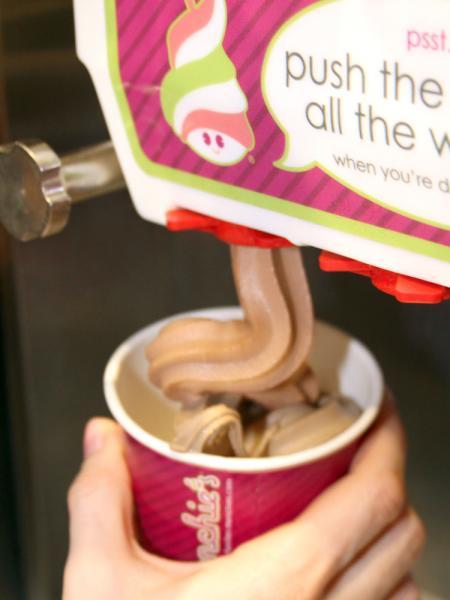 I walked through the door and was immediately struck by the scent of fresh waffle cones. Never a bad way to start an afternoon, I figured. This, only my second visit to Menchie’s, was definitely going to be interesting, as I was there for something called a “Blogurtfest”. It had been hashtagged all over Twitter in recent days, and I had been invited. I couldn’t say no – I mean who ever says no to frozen yogurt experimentation…? For Serious. So I went in. I smelled the waffles, I saw the toppings, I checked out the flavours. With my senses properly piqued I continued on and found the small-ish group I had been expecting on Saturday afternoon for the first official Blogurtfest. 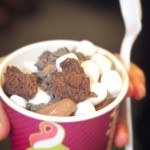 I immediately met Jennifer Hall, Mary Luz Mejia, Anabelle Waugh the Food Director for Canadian Living (who turned out to be on the judging panel), and Carrie Brunet (of Kitchen Vixen). I also saw a few familiar faces in the crowd (namely Joe Solish and Bonita). I sat down and started to wonder what we were in for; thinking this was going to be a rather intimate FroYo endeavor. Turned out “intimate” was hardly what one would call at least 20 especially chatty foodbloggers, 4 funny and quite food-savvy judges, a few incredibly enthusiastic organizers and several eager customers, whose numbers expanded and contracted over the course of the two hours we were there.

The challenge of the afternoon was to come up with the best combination of yogurt flavour(s), topping(s) and sauce(s) to create a FroYo of biblical proportions. I stuttered and stammered to my brother (whom I had brought along to photograph the endeavour) that I had no idea what to do. I was torn. My good-girl Domestic Goddess image was clashing very strongly with the bad girl I have hidden, deep inside. You see, even though I had been explicity told not to bring any outside ingredients, I had stashed a few little flavour “boosts” on my person. That morning I had baked butter tarts and hidden one in my purse. I had two Nanaimo Bars nestled in along with said butter tart. I had also fried up some rather scrumptious beef bacon (courtesy of Zane at Caplansky’s Deli) and had made it into bacon bits, which — you guessed it — I had hidden in my purse. What, you don’t carry around dessert and bacon in case of emergencies? Whatever. 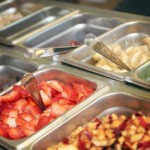 So there was my conundrum. To cheat or not to cheat. I actually sidled up to Joe Solish at one point and offered him my bacon. I think he thought I was flirting with him when I whispered, rather non-chalantly, that I had bacon in my purse. After the competition he and I tossed some bacon bits on our FroYo creations to see if it worked. I thought it did, he thought I should have candied the bacon. I guess that’s the allure of Menchie’s – you can go there, pile on what you love and then add bacon to it (if you have some in your purse!)… oh, and possibly get out your blow torch out and toast up those teeny marshmallows while you’re at it…because really, it’s all about what YOU like…right? 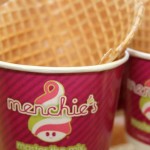 What did I end up creating? I fell back on my own favourite stand-by flavour combination: a good old fashioned S’More (Chocolate, Marshmallows, Cookie Crumbs, more Chocolate, more Marshmallows). I dubbed it “S’More Chocolately Goodness”; I guess the judges were intranced with the fruity and tarty flavours of the FroYo creations by Beverley and Sean, Irene and Jennifer (and of course Neil and Jenny’s honorary mention) and weren’t in the mood for a delicious, old-fashioned Marshmallow-Chocolate mash-up.

No, I’m not a sore loser. But if I’d used the bacon (or a blow torch) I would have won for sure.