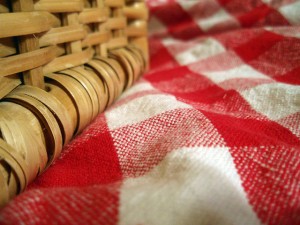 I ended the conversation by asking him to get his boots on because it was time for school and breathed a sigh of relief when the conversation turned to a discussion of where the elevator went after it dropped us off (for some reason he has decided that it goes to different buildings and I didn’t have the heart or the energy to explain that our elevator doesn’t moonlight for other apartments). I dropped him off, kissed him goodbye and told him I’d pick him up later.

I felt bad all day. Why couldn’t we have a picnic? We could sit outside in the rain if he really wanted to. But I hate the cold and I hate sitting in it even more. My body simply wasn’t built for cool, wet days and I just couldn’t see myself remaining civil through a meal eaten outside, sitting on the cold ground, on a rainy, blowy, yucky day.

When I picked him up from school he looked at me expectantly. I smiled and said “let’s go home bud”, like I usually do. He asked me what was for dinner and I told him he’d find out when we got home. He bundled up, grabbed his art he’d been working on and we hit the road for the quick trip home.

Walking through the door he noticed something on the floor in the living room and his eyes lit up. I had set up a picnic for us before picking him up. There were blankets and pillows all over the floor. On one side there was a pile of books and even a football and his scooter. I’d “packed” a basket with milk containers and straws, picnic food and even dessert. He was thrilled.

And what did he say to me when I tucked him into bed later? He turned my head so he could whisper in my ear his little confession: “Thanks for the picnic, Mama. Even if it wasn’t outside. It was the best dinner ever.”

2 Replies to “A Picnic in the Rain”