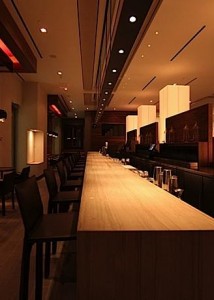 Nota Bene was his resto of choice for our festivities and I doubt if I could have made a better selection myself. The day had gotten off to a bit of a strange start; I went to get a haircut in the morning and he dropped Leith off at his sister’s house for his very own day of revelry. We were supposed to go to the Art Gallery together but as usual, there were scheduling difficulties (my jeans were not washed and the coffee wasn’t kicking in fast enough) and we didn’t make it. Instead we hit a comedy club and I swear, I laughed so hard I had to stop myself because my face hurt tremendously. Afterward we stopped in at one of the many Firkin pubs to see my brothers band “Big Fog” do a pre-St. Patrick’s Day set (it was amazing by the way). By the time we got back in the car and on our way to our 10:30 pm reservation I was really quite drained and doubted I would be able to finish dinner with my eyes open. We drove through the crowded Saturday-night streets and arrived at the restaurant we’d never even noticed was there (it opened a year ago) at Queen and Bay.

Our table was ready (I suppose I shouldn’t be surprised, it was 10:40 pm) and waiting for us in the unexpectedly airy, 110-seat dining room and it was as though they knew where to seat me precisely. I think that is the way the room is set-up – all the seats are probably just as good. The decor is minimalist – dark wood with beige and black as the main tones – but doesn’t feel impersonal or austere. It was noisy but in that nice way where you feel comfortable talking to your dinner companion, knowing that no one will overhear what you’re saying to them, but not so noisy that you can’t hear yourself speak. The art was modern and eye-catching (abstract urban landscapes by Canadian Alex D’Arcy) but didn’t interfere with the room or the ambiance and I immediately felt “at home” there. 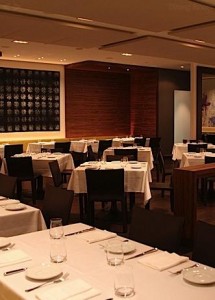 The bread was brought to the table, along with a dish of truly delicious olive oil. Fruity, but not so much so that it lacked character and with a finishing note that made me smile. We relaxed a little and munched in comfortable silence, absorbing the moment. I leaned back against the soft leather banquette and smiled at S. He had chosen a good one, once again. Our waitress arrived, brought us water, took our orders and left us alone. A few moments later a glass of perfectly chilled Prosecco arrived for me and the evening took on a cozy but festive feel.

We decided to start with the Mozzarella di Bufala Salad (with sundried tomato, grilled radicchio, shaved parmesan and olive oil). The mozzarella was delicious – supple and moist with a fresh and discreetly sweet flavour. It was was nicely balanced by the peppery, still slightly crunchy grilled radicchio and the toothsome sundried tomato. The salty shards of parmesan and delicious olive oil finished the salad off perfectly.

For my main course I decided on the Braised Beef Short Rib (served with a cucumber, cornichon and pickled horseradish salad) and the meat (served next a clean bone for a perfect presentation) was so tender it was like cutting through warm brie; I could have used a spoon. The salad was a natural pairing with the beef and such a welcome change from frites or mashed. It was served with a small swirl of cauliflower puree that was so utterly delicious I actually wanted to lick the plate (I didn’t, don’t worry!). S. chose the Grilled “Rare” Hangar Steak (with guajillo spice, tomatillo, lime and avocado chutney) and thoroughly enjoyed this perfectly rare hunk of beef. We went a little crazy and ordered a heaping platter of the light-as-paper onion rings “for the table” and though we both found them slightly greasy, we did indulge – licking our fingers as we went – quite a bit.

Our tummies full and mood satiated, we just had to take a peek at the dessert menu. Of course once we did we were hooked. I briefly considered the cheese plate (selections chosen by the infamous Cole Snell of About Cheese) but settled instead on the Niagara Apple Crumble (with mulled apple cider jus and vanilla ice cream) and S. ordered the Creme Caramel (with salted hazelnut praline and candied orange peel). I half expected dessert to be a bland disaster as has been my experience with high-end restaurants; if they do a dinner that knocks your socks off, dessert will undoubtedly suffer. Such was hardly the case at Nota Bene – dessert was an experience in deliciousness. The crumble was sweet and tart at the same time and the apple cider jus did not for a second overpower the taste or dampen the texture. The crust was crisp and supple at once and it all went perfectly together with the vanilla bean-studded ice cream. S’s creme caramel was, in his words, the creamiest he’d ever had – I watched him out of the corner of my eye at one point, his eyes closed, pure rapture on his face. My desserts never make him smile like that…I was almost jealous.

We both enjoyed dinner at Nota Bene and intend to get back there again sometime – hopefully soon. The newest restaurant by the internationally acclaimed chef David Lee has great food in the perfect atmosphere at not such an expensive price that we couldn’t plan on returning. I highly recommend it…especially if you’re willing to take me with you!